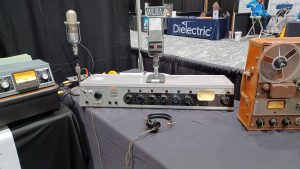 WLHA is a proud member of the Wisconsin Broadcasters Association (thanks to the very influential Tom Bolger), so it was only natural that we should show for the WBA Broadcast Clinic.

Here’s a report from correspondent Casey the K:

Nivek, Dan Smith, and I represented WLHA at the Wisconsin Broadcast Association, “Broadcast Clinic” Engineering conference in Madison.  This is an event that is focused on technical presentations for broadcast engineers and there is an equipment exhibition by broadcast manufacturers.  It draws broadcast engineers from all over the midwest. The local Society of Broadcast Engineers invited me to bring in some of our radio museum collection for a nostalgic display and gave us a very prime location booth. 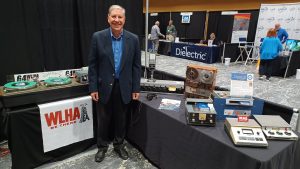 So we set up a booth display with some WLHA signage and a stack of red WLHA business cards and we showed off the mint Gates Yard console from 1954, the Gates Biamote remote mixer from about the same time, a 1959 ATC tube cart machine, a 1961 Spostmaster hybrid tube & solid state cart machine, a 1959 Ampex 601 tape recorder, a pair of Collins/QRK turntables (just like WLHA used to use), a two early transistorized remote mixers from Gates and Collins.  We also had the restored 1938 RCA 44BX and 1954 RCA 77D ribbon mics hooked up and making the VU meters twitch on the console. 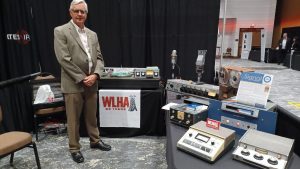 Old nostalgic gear is a great magnet for broadcast engineers.  Ours was a very popular booth.  Several people commented that it was the most fun to visit at the show.  Some people came back later with others and asked to have photos taken with the equipment.  We attracted a steady stream of broadcast engineers and engaged them in fun discussions about the gear and gave them the background on what WLHA is all about. We handed out a lot of red WLHA cards and I think we made a lot of new friends with people who clearly love radio.

My favorite story of the evening was towards the end of the night and I was talking about WLHA with a radio guy from Chicago.  I explained how our jocks originate shows from the various cities around the country, and we even had a very colorful fellow who does his shows from over near Manchester in England, who still does radio in the style of Radio Caroline. As soon as I said that, a look of familiarity lit up the face of my visitor and he said.  Are you talking about that radio guy that the BBC did the film about, that’s on You Tube? Deke somebody? Ha Ha. Yes, that is exactly who I am talking about. He does shows for us every Sunday. Deke’s international fame is really quite remarkable. I think we have excellent potential to pick up some new listeners.

Thanks for that report Casey. We’re WLHA and we always try to “be there”.