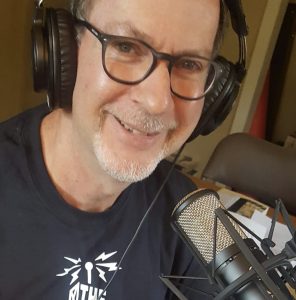 Brian Carter (“Slide Carter the Radio Doctor”) is a WLHA alumnus, first appearing on the air with “Rockin Bob” Schwoch on a combined evening shift in 1979. A native Hoosier, Brian grew up in the suburbs of Chicago where he was exposed to some of the best radio talent in the country. Listening to WLS, WCFL, WGN, and even WMAQ led to a deep love of all things AM, and he actively scanned the evening dial for far away stations.

“The Doctor” is not a career broadcaster. After earning his Music Education degree, Brian began a 27 year career as a public school band instructor before returning to air several years ago after seeing that WLHA was still alive and well. He married the love of his life (known as the on air persona “Nurse DJ”) and is blessed with four grown children and six grandchildren, many of which can be heard on the air sometimes. He and Nurse DJ reside in suburban Milwaukee where they enjoy hiking, travel, and the “grands.”